5 Signs Your Loved One Is Drinking Too Much 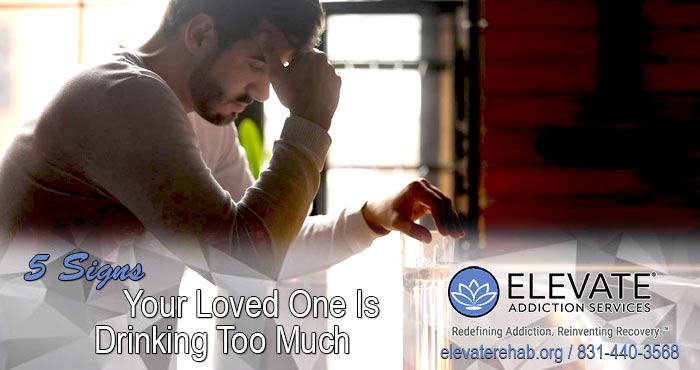 If you feel that your loved one is drinking too much, there is a good possibility that they have some level of alcohol use disorder (AUD).

While there are many signs associated with alcohol abuse, the following are some of the most recognizable symptoms.

The following is a list of five signs your loved one may be drinking too much. It is important to note that there may be many other factors. Seeking professional treatment for alcohol abuse is a significant first step to getting your loved one back on the road to healing.

1. Getting Sick From Drinking Too Much

Once in a while, a person might get sick because they overindulged in drinking one night. However, one of the signs your loved one is drinking too much is if they become sick multiple times a week.

Sickness after drinking too much is called alcohol poisoning. It is very much like overdosing on any other drug, and if it’s severe, it can put the person in the hospital.

Alcohol poisoning happens because so much alcohol is consumed in so little time that it affects the person’s metabolism adversely.

Symptoms of alcohol poisoning include:

You may notice that your loved one has a drink every day. There are cultures where it’s normal to have a glass of wine at dinner, but a person with an alcohol abuse problem drinks at meals, drinks in between meals, and may have a drink at any time of the day.

They also drink alone more than they drink with other people. They may even claim that they simply can’t function unless they have a drink. It’s also common for people with an alcohol use disorder not to stop at one drink.

It is not uncommon for a person with an alcohol abuse problem to experience withdrawal symptoms when they don’t drink.

Indeed, some people drink so they won’t experience these symptoms. More than 200,000 people experience the discomfort of alcohol withdrawal every year.

Symptoms of alcohol withdrawal can range from mild to severe and include:

In a severe withdrawal case, the person may also experience hallucinations and seizures.

4. Hangovers In The Morning

Another sign of alcohol abuse is if the person shows hangover symptoms almost every morning. These symptoms may affect them to the point where they have to stay home from school or work.

Hangovers happen because too much alcohol in the system makes you dehydrated, sets up an inflammatory response in the body, causes blood sugar levels to crash, irritates the stomach, dilates the blood vessels, and causes the quality of sleep to deteriorate.

Alcohol itself produces toxins. This all leads to symptoms such as:

Besides the loosening of inhibitions that comes with being intoxicated, people who drink too much can neglect their obligations toward other people.

This includes a spouse, a friend, an employer, a co-worker, or a child. They may stay home from work or prefer drinking over their responsibilities.

They may have problems with money, lie about their drinking, or sneak drinks at school or work.

They may lash out when you question them about how much they drink, making it hard to know what to do if your loved one is drinking too much.

A person with an alcohol abuse problem even neglects their responsibilities toward themselves as they often neglect their hygiene and nutrition.

Can Drinking Too Much Lead To Alcoholism?

Drinking too much can, indeed, lead to alcoholism. Alcohol is a drug, and after a while, a person can build up a tolerance that can lead to dependence and addiction.

Tolerance means that the person has been drinking long enough they’ll need to drink more alcohol to give them the same effect that they experienced with a smaller amount.

Dependence happens when the person has withdrawal symptoms from not drinking enough to feel “normal,” and addiction means they cannot stop drinking even if they suffer harmful consequences.

Long-Term Risks Of Drinking Too Much

Alcoholism comes with its own set of risks. These can include damage to the brain, the digestive system, and the cardiovascular system.

People who drink excessively can develop over time:

Individuals who drink excessively are more at risk for certain cancers, including primary cancers of the liver, throat, mouth, and esophagus.

When someone drinks heavily, they are also more at risk of experiencing:

Pregnant women who suffer from alcoholism may additionally put their babies at risk of fetal alcohol syndrome and sudden infant death syndrome.

What To Do If Your Loved One Is Drinking Too Much

Drinking occasionally isn’t necessarily harmful to most people. But heavy drinking that leads to alcohol abuse can lead to addiction, withdrawal for which symptoms can be excruciating and/or dangerous, and damage to both the mind and the body.

The damage caused by alcohol abuse can also result from the person’s reflexes and mental state being impaired while intoxicated.

If you believe you or someone close to you may be drinking too much, contact one of our treatment specialists today. We can help you, help them get their lives back on track.