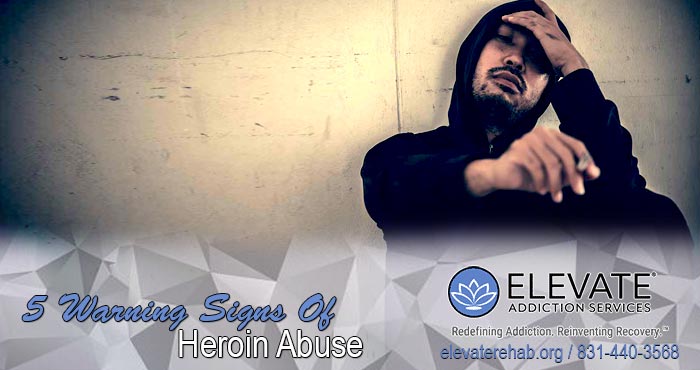 More than 494,000 people admitted to using heroin at least once in 2017. Unfortunately, that number has continued to increase since then, especially regarding women and those with higher incomes.

Heroin is a highly addictive opioid that can cause numerous physical and mental health problems. It is crucial to recognize the following warning signs of heroin abuse.

The symptoms of heroin abuse are startling to see for someone who has not spent much time around individuals with addiction. Heroin can cause rapid changes in a person’s physical appearance, including:

Arms and other areas of the body may have track marks from heroin injection. Track marks look like small sores. If dirty needles are used, there might be signs of a skin infection around the wounds, such as swelling and redness.

If someone is abusing heroin, their eyes may look bloodshot and hollow. Their pupils will likely be severely constricted (smaller than usual), which is a symptom that is commonly referred to as “heroin eyes.”

Other physical warning signs include frequent nausea and vomiting that can’t be attributed to any other health condition and decreased personal hygiene, such as messy hair and disheveled clothing.

Signs of heroin abuse can also include mental shifts, like depression and paranoia. Heroin affects someone’s behavior because the drugs influence the neurochemicals in the central nervous system (brain and spinal cord).

Other symptoms, like confusion and disorientation, are possible warning signs of heroin abuse, too.

It is common for those who take heroin to increase amounts of it as they build up a tolerance, impairing their ability to process and remember information.

3. Behavioral Signs Someone is Abusing Heroin

Since this drug is highly illegal, many loved ones notice the heroin abuse signs that affect a person’s behavior first, such as becoming more secretive about where they are going and when they will be back.

The person may start to lie more often or wear sunglasses and long sleeves to cover up heroin abuse evidence.

Heroin decreases energy and motivation, so it also helps keep an eye out for someone suddenly avoiding their responsibilities or losing interest in hobbies they used to enjoy.

One of the most obvious warning signs of heroin abuse to look for is the appearance of withdrawal symptoms when someone cannot get more of the drug.

Heroin withdrawal signs and symptoms can include:

Withdrawal from heroin begins six to 12 hours after the last dose, peaks around two to three days, and will last for at least a week after someone’s last dose.

5. Signs Of Heroin Addiction Or Dependence

Those who don’t have an addiction may not understand that some drugs cause people to become physically dependent.

Physical dependence is different than simply being addicted to something. With dependence, a person’s body will not be able to function without heroin.

If an addicted person tries to stop taking it on their own, they can become very sick. This is what leads to withdrawal symptoms.

Heroin is considered one of the most dangerous drugs because it causes physical dependence much faster than other substances, including cocaine.

How to Help Someone Struggling with Heroin Abuse

Most people who begin using heroin have no intention of becoming addicted to or dependent on the drug.

They may try it once as an experiment at a party or some other type of social gathering. After this, the reward center of their brain causes them to develop cravings for the substance.

The only way to stop the cycle and ensure that the withdrawal process is safe is to have an addicted person admitted to a facility that offers medically, supervised detox programs.

Following this, inpatient treatment is recommended due to the high rates of relapse associated with heroin addiction.

Those with severe heroin addictions have a hard time staying true to sobriety within outpatient programs. If you know someone who is struggling with heroin addiction, our treatment specialists can help.

Call Elevate Addiction Services to see how we can help you get the treatment you or your loved one needs today.