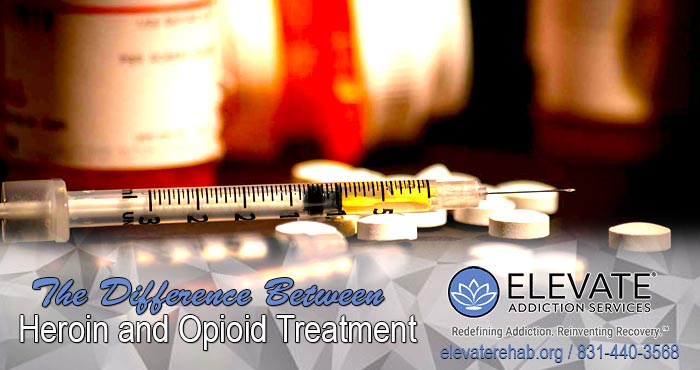 In the United States, the drug abuse epidemic is becoming more and more lethal as time progresses. At the center of the epidemic are prescription opioids and heroin.

These drugs are related to each other, and therefore have many similarities in effects, addiction symptoms, and drug treatment program options. However, the critical difference between the two is the legal status of heroin within the US.

Because of its illicit nature, heroin has not only become a popular drug to turn to when prescriptions for legal opioids run out.

The Relationship Between Prescription Opioids And Heroin

People who abuse heroin have typically abused prescription opioids prior. Those who have substance abuse problems involving heroin naturally started using opioids before their heroin use.

Research shows that prescription opiate abuse may be a stepping stone on the path to heroin use. Heroin is also at times less expensive, as well as easier to come by than prescription opioids.

If unable to obtain a prescription, it is likely that a person facing opioid withdrawals would eventually look elsewhere to find a drug that will make their withdrawals dissipate.

Heroin used to be prescribed as a painkiller. Here in the United States, from the late 19th century until the early 20th, heroin was prescribed for many different ailments, considered to be a cure-all for anything from depression, sluggishness, and colds to tuberculosis and even cancer.

By the time 1920 rolled around, and Congress enacted the Dangerous Drug Act, the market for heroin has already opened up in the states.

Because Heroin is a specific type of opiate made from morphine, treatment for heroin addiction and prescription opiate abuse treatment is very similar.

The main difference between treatment for heroin addiction and prescription drug treatment programs is the legality of the substance being abused.

Because a doctor prescribes prescription pain relievers, they are frequently seen as less dangerous than heroin.

However, those in rehabilitation for prescription drug use must learn the truth about the dangers of drug abuse.

Because heroin is an illicit substance in the US, those obtaining the drug must do so through other means. This often means getting involved in dangerous situations.

Those facing heroin addiction often live in more dangerous areas where they are exposed to people trying to sell them drugs. In a prescription drug abuse setting, the drugs are obtained through a pharmacy initially, and therefore pass through the eyes of passersby more easily.

The treatment focus for heroin addiction must be on changing the people, places, and things the person facing addiction previously associated with.

This is because they serve as possible triggers on the road to recovery and can expose those early in their recovery to situations that may cause a relapse.

What are prescription opioids?

Prescription opioids are made both using the poppy plant and synthetically within a lab setting to provide medication for those suffering from severe pain.

While prescription drug abuse rates continue to increase, these medications remain highly regulated due to their addictive nature.

Typically ingested orally, the most commonly prescribed opioids include:

There are several different systems throughout the body which are affected by drug abuse:

Kidney damage, and at times kidney failure, can occur as long-term side effects of opioid abuse. Due to chemicals in the bloodstream poisoning the body’s organs.

Dialysis becomes necessary in this situation, and without a transplant, kidney failure is fatal.

Opioid abuse has the potential to affect the lungs as well. Opioids alter breathing in a way that increases the possibility of developing pneumonia.

Fluids can also potentially build up within the lungs, causing further complications. Due to bone regrowth impairment at a cellular level, abusing prescription opioids can cause a high bone loss risk.

Regrowth impairment is caused by defective nutrient absorption in the gut. Bone loss is responsible for many fractures and broken bones among those facing prescription opioid abuse issues.

The use of prescription opioids slows the body’s digestion rate and has the potential to cause leaky gut. Leaky gut is a condition during which the gut’s biome is disrupted, causing pores to open within the intestinal lining, releasing drugs and toxins into the bloodstream.

In addition to leaky gut, opioids interfere with receptors in the intestines, most often leading to constipation.

The Heart and Veins

The risk for a heart attack is increased among those taking prescription opiates. The vascular system is also affected in those injecting opioids.

Because most prescription opiates are available in pill form, those who inject the drug must crush and dissolve the pill in water before injecting. The resulting concoction can potentially still contain small fragments of solid material.

Once injected, these solid particles can cause blockages within the tissues of the body. The purpose of the liver is to process and filter toxins within the body.

Acetaminophen, a drug commonly combined with opiates in pain killers, is particularly hard on the liver. Because of Acetaminophen’s presence in prescription opiates, opiates’ abuse can cause liver disease, a fatal ailment.

Addiction to prescription opiates also has the potential to cause mental and emotional side effects. Opioids work by binding to receptors within the central nervous system. This system includes the brain.

Once bound to these receptors, opiates mimic pain relievers naturally produced within the body. This can result in the lessening of pain and even feelings of euphoria, resulting in:

As the drug’s use continues, the body requires more and more of the substance to feel the same state of euphoria. Once the dosage size is increased past the recommended amount and addiction sets in, withdrawal symptoms may be felt if more of the drug is not administered.

The symptoms of prescription opiate withdrawal include:

Overdosing on Opioids and Heroin

Like heroin, prescription drugs can be abused to the point of an overdose.

During an opioid overdose, the rate of breathing is slowed considerably, resulting in oxygen being cut off from the brain. This can result in

Heroin is a specific type of opioid. The drug is made from morphine, which itself is derived from the opium poppy. Heroin appears all over the world in many different forms.

Heroin is typically found in the form of a powder, ranging in color from white to brown. Powdered forms of heroin generally are cut with another powder of similar color and consistency like:

More recently, heroin has been cut with fentanyl to increase its potency. Many people overdose on heroin laced with fentanyl because they are not aware of the presence of fentanyl.

Because of its bitter taste, heroin is typically ingested either through smoking or snorting the powder, though injecting the drug is another way to take it.

Black tar heroin has a dark black, sticky, sometimes solid appearance that it’s named after. The color of black tar heroin is a result of impurities left behind throughout the drug’s creation. Making it potentially more dangerous than standard heroin.

Black tar heroin is most often injected into the body after being diluted down.

Because it’s technically an opioid, heroin works much in the same way prescription opioids do. It binds to receptors in the brain, specifically those responsible for regulating pain and euphoria feelings.

Once the heroin becomes bound to these receptors, the brain is signaled to release dopamine, resulting in good feelings and reinforcing the behavior.

Because the receptors in each person’s body are different, it can be challenging to predict how heroin will affect each person individually.

People using heroin typically feel a ‘rush’ after first consuming the drug. The intensity varies, but the feeling of a ‘rush’ can be accompanied by a dry mouth, heavy hands and feet, and flushed skin.

Itching is also known to occur over the entire body. After using heroin, a person will feel exhausted for many hours.

This exhaustion can be accompanied by depressed breathing and a slowed heart rate. After continued use, heroin does affect the brain, decreasing the overall amount of white matter present.

The loss of this white matter can result in a decrease in cognitive functions such as:

How Heroin Damages the Body

Other organs within the body are also damaged by heroin use. Insomnia and constipation are popular effects of long term heroin use without heroin addiction treatment.

The lungs are also affected, as the body is more predisposed to getting pneumonia. Depression and antisocial personality disorder can also develop as a result of heroin use.

The hormones in the body are also affected, leading to sexual dysfunction among men and irregular periods among women.

Different forms of administration also come with additional side effects or consequences of use. Those who snort the drug are likely to develop problems with their nasal passages.

Those injecting the drug are creating scar tissue, meaning they must rotate injection sites. Blown veins, infections of the blood vessels, abscesses, and other skin infections are also potential risks.

Blood vessels can also become blocked with the substance being injected.

Using dirty needles exposes those dealing with heroin addiction to many other diseases, including hepatitis and HIV. These illnesses can then be passed on to sexual partners and children.

As with prescription opioids, heroin withdrawals begin very quickly if more of the drug is not ingested. Symptoms can present themselves in as little as a few hours since the last use of heroin.

Symptoms of withdrawal, peak approximately one to two days after the last use of the drug, and subside after about a week. However, depending on the severity and degree of addiction, withdrawal symptoms can persist for several months.

Symptoms of withdrawal include:

It has become evident to the medical community that heroin is addictive to an extreme degree, necessitating heroin addiction treatment.

Heroin addiction can often result in heroin use disorder. This disease takes place when relapsing occurs to the point where the individual becomes more than physically dependent.

This often results in drug-seeking to the extreme, with no regard for any consequences or dangers.

Overdosing on heroin is a strong possibility for those using the drug if heroin addiction treatment is not received.

This is because heroin depresses the respiration of those using the drug, similar to the overdose effects of prescription opioids.

Like other opioids, if medical intervention does not occur, and there is no heroin addiction treatment, heroin overdoses can result in death.

While it is true that treatment for opioids and treatment in heroin addiction recovery centers have many similarities, the fact is that their treatment must be different because of the legal status of prescription opioids.

While opioids can be more safely obtained and taken, heroin addiction can put those facing substance abuse in many dangerous situations.

The people, places, and activities a person was associated with during their addiction must be altered within a heroin rehab center if sobriety is going to be successful.