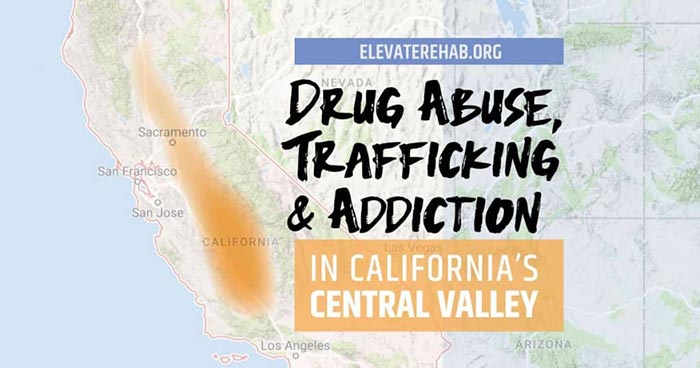 California’s Central Valley stretches from Bakersfield in the south to Redding in the north. The Valley encompasses a great deal of the state’s interior and includes major cities, including:

Though it is not as densely populated as California’s major cities, the valley’s substance abuse and addiction rates are well above those in the metropolitan areas.

Though much of the Central Valley is still made up of rural areas and agricultural centers, the availability of drugs throughout the valley rivals the access found in cities such as San Diego, Los Angeles, and San Francisco.

The primary reason that illicit drugs are so widely available in the area is because the I-5 has become one of the leading transportation lines that drug traffickers use to bring drugs into the country from Canada and Mexico.

Criminal groups have established hubs along the I-5 where the following substances are prepared for distribution and sale, including:

These local hubs provide ready access to these substances to residents from even the most rural valley areas.

Through the 1990s and into the early 2000s, methamphetamine was the most pressing substance-abuse concern in California.

Since 2008, however, the abuse of prescription painkillers, opioids, and heroin in these areas has outpaced the threat of meth.

Even worse, many individuals struggling with opioid addiction have turned to heroin, which is cheaper and easier to acquire than another pain pill prescription. In this way, the nation’s issues with drug abuse can no longer be dismissed as “just an inner-city problem.”

The surge in heroin and opioid abuse and its demographic shift from California’s coastal cities to the rural Central Valley reflects the movement of illegal drugs across the entire country.

In a 2011 report on the Central Valley HIDTA, the Justice Department outlined the scope of the drug abuse and trafficking problems facing Central Valley:

According to the Justice Department report, a total of 119 meth labs in total were removed from Central Valley in 2009 alone:

As recently as 2016, five individuals in Fresno were indicted on drug trafficking charges. The indictment followed an investigation into a drug trafficking group, based in California and Arizona, with ties to Mexican cartels.

Throughout the investigation, 30 pounds of meth were seized along with firearms, ammunition, and nearly $12,000 in cash.

U.S. Immigration and Customs Enforcement’s Homeland Security Investigations (HSI) were happy to get these drugs off the streets. However, they admitted that the victory was just the tip of the iceberg.

Even more recently, Fresno police seized a kilogram of heroin (with a street value of over $100,000) from a truck at a convenience store near Scandinavian Middle School in February of 2017.

While the investigation is still ongoing, police are looking into ties the man had with the Mexican cartels who run the Central Valley trafficking network.

While local and national agencies are working on ways to disrupt drug trafficking in the Central Valley, criminal manufacturers and distributors remain a step ahead of law enforcement.

As a result, untreated drug abuse and addiction continue to strengthen the market for illegal drugs.

Across the Central Valley and the United States, there is a growing trend of communities recognizing the need for substance abuse treatment.

These communities have begun to prioritize helping those struggling with addiction over merely trying to get rid of the drugs themselves.

While authorities continue to hinder illegal traffic and seize drugs off the streets, the reality is that drugs are already abundant in California and impact Central Valley residents’ lives.

At Elevate Addiction Services, we offer a caring and unique approach to holistic addiction treatment. With three treatment locations–Watsonville and South Lake Tahoe–we are conveniently located to provide residents of the Central Valley a peaceful environment where they can focus on their recovery.

From initial detox to continuing care, we offer our guests a structured, effective approach to recovery, which can instill hope in those struggling with drug addiction.

Our services are available to any of our Central Valley neighbors in need of care.