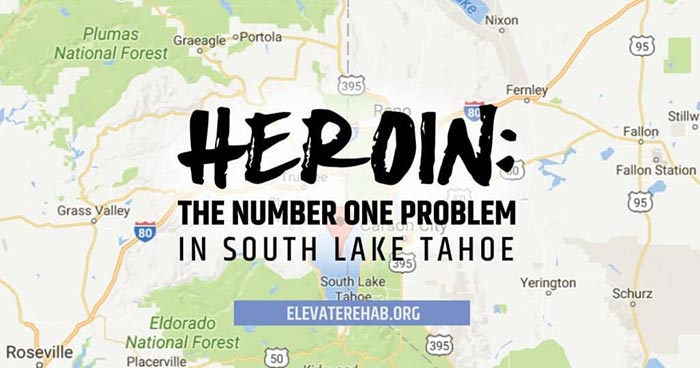 South Lake Tahoe, a town of about 20,000 nestled on the southern shore of Lake Tahoe, is widely known as a vacation destination.

Like any town that caters to vacationers from out of town, South Lake Tahoe has had to deal with its fair share of guests using recreational drugs or engaging in binge drinking.

Today, however, the alarming rate of drugs and drinking among the full-time residents of South Lake Tahoe has law enforcement and state officials very worried.

Local law enforcement first noticed the problem in 2008. Prior to then, drug possession, sale and intoxication cases in the area were limited to occasional cases of marijuana possession or prescription drug misuse.

After 2008, local officials found themselves on the front lines of the opioid epidemic sweeping across the nation.

“Heroin use in South Lake Tahoe is a concern for our future,” said a local law enforcement officer.

Law enforcement is right to be worried. After all, the increase in heroin use for El Dorado County and South Lake Tahoe mirrors the rates of use seen in areas like rural Kentucky, where the epidemic is at its worst.

A 55 percent increase in heroin-related deaths was measured in the area last year.

The heroin problem is directly tied to prescription drug abuse.  Today’s heroin users in the South Lake Tahoe area are usually unemployed, between the ages of 25-35.

From Prescriptions to Heroin

Many claim that they got their start with prescription opioids, specifically painkillers like Hydrocodone and Oxycodone.

In the early 2000s, the over-prescription of painkillers and other prescription drugs was at the highest levels ever recorded and abuse was rampant. Lawmakers stepped into a crackdown on the abuse and employed a number of tactics to strengthen prescription drug monitoring programs.

While the changes made access to prescription drugs more difficult for abusers, it did not fix the core issue of substance abuse, and many say that this move actually exacerbated the problem.

At one/tenth of a gram for $15-$25 on the streets of South Lake Tahoe, heroin is relatively cheap in the area and is more affordable to an opioid addict than black-market prescription painkillers.

Drug dealers across the country have already recognized the demand for opioids and are actively searching for opportunities to turn prescription drug users into heroin addicts.

Targeting the most rural counties of the United States, where drug abuse treatment and education can be limited, is a strategy being leveraged by dealers across the country.

In Lake Tahoe, the heroin is usually moved into the city from the local trafficking hubs of Stockton, Reno and Modesto.

Authorities say most local dealers are addicts themselves, looking to support their own habit while maintaining ready access for other users within their community.

In El Dorado County, there were a total of 115 overdose deaths reported between 2012 and 2014. In such a sparsely populated county, these escalating deaths reflect how opioid abuse in rural California has grown out of control.

Heroin Is The Most Abused Substance In South Lake Tahoe

Detective Liles’ words ring quite true with the members of the community, who state that they have never seen such problems hit the usually laid-back town.

Property crime, violent crime, and emergency room visits are all increasing year after year and can be tied back to the illegal drug trade in the area.

While authorities have actively stepped up their pursuit of regional drug dealers, the heroin problem grows worse more quickly than law enforcement can deploy solutions.

This situation is happening not only in El Dorado County but across the nation. Laws have been made in an attempt to stem this crisis.

Work has been done to give increased access to addiction treatment programs. Yet the problem persists.

Community leaders in El Dorado County are looking for new ways to tackle the heroin problem.

Many cities across the country are looking to prioritize treatment over punishment, and considering options for treatment that they might not have considered before.

South Lake Tahoe also is pushing for easier access to addiction treatment in the area; make it easier for local users to get a shot at recovery.

With this assistance and support readily available, it is more likely that South Lake Tahoe residents will choose to seek treatment, break the chains of addiction, and start a new trend towards recovery.