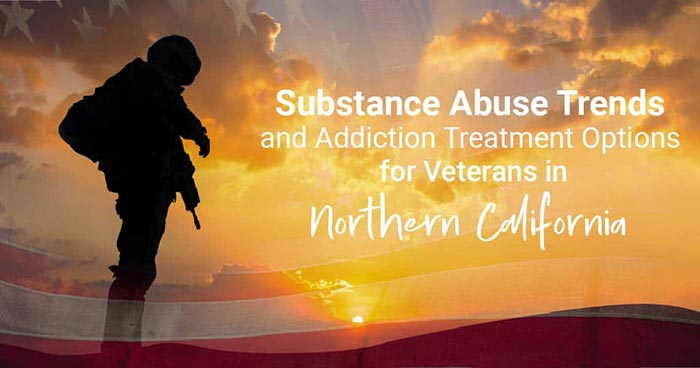 Of the estimated 23.5 million vets in the United States, about two million of them live in California—more than any other state.

Substance abuse and addiction cross all barriers and affect people from all walks of life, including veterans.

If you or someone you love is a veteran and struggle with substances, you’re not alone.

Many veterans struggle when returning to civilian life. They may be dealing with traumatic experiences that affect their mental health and eventually lead to substance abuse.

Other stressors may cause veterans to reach for substances to help cope, including:

Luckily, there are resources available to help them overcome these challenges and get their lives back under their control.

Because many of those enlisted in the military experience high-stress situations regularly, they can struggle with poor mental health when returning home.

All veterans experience a period of readjustment as they reintegrate into life with friends and family, leaving them with unique mental health challenges.

There are several environmental stressors specific to military personnel that have been linked to increased risk of substance use disorders (SUDs). These stressors include:

As a result of these experiences, veterans may experience symptoms of:

Everyone will feel these symptoms differently.

As a result, the symptoms of these conditions may range from uncomfortable to debilitating.

Veterans, in particular, are at a higher risk of committing suicide. Roughly 13 percent of suicides reported in the U.S. are veteran suicides.

A Closer Look At PTSD Dual Diagnosis in Veterans

Veterans with PTSD may have flashbacks or nightmares about their traumatic experiences, making it difficult to deal with daily activities.

Among recent Afghanistan and Iraq War veterans, 63 percent diagnosed with Substance Use Disorders (SUD) also met the criteria for PTSD.

Veterans diagnosed with PTSD and SUDs are more likely to have addiction co-occurring psychiatric and mental conditions, including:

PTSD symptoms may worsen in those who have experienced more severe injuries or spent more time in combat.

If this mental health issue goes untreated, it can interfere with other parts of the person’s life and may also increase their risk of committing suicide.

Individuals who experienced trauma or were hospitalized or injured during combat are at an increased risk for drinking and drug use.

The onset of a substance use disorder can also emerge after other mental health problems associated with veteran stressors, such as post-traumatic stress disorder (PTSD) and depression.

The veteran population is also influenced by several other mental health issues related to substance abuse, including pain, suicide risk, trauma, and homelessness.

Sadly, suicide rates among active-duty personnel and veterans are higher than the general population.

Around 20 percent of high-risk behavior deaths were attributed to alcohol or drug overdose.

In 2017, a study found that veterans taking the highest doses of opioid pain relievers were more than twice and as likely to die from suicide than those taking lower pain medication doses.

It is estimated that about 11 percent of the homeless population are U.S. military veterans. Roughly 70 percent of homeless veterans suffer from a substance use disorder.

More than one-in-10 veterans are diagnosed with a substance use disorder, which is slightly higher than the general population.

The following are substance abuse trends of several different substances, including:

In recent years, the rate of illicit drug abuse among active-duty personnel has decreased. However, this is based on a self-reporting survey, so it may not be an accurate indicator of substance abuse rates.

On the other hand, reported rates of illicit drug use increase when active-duty personnel leave military service.

The percentage of veterans who reported illegal drugs as their substance of abuse during admission to a substance abuse treatment include:

Because most active-duty military personnel are younger, males are already at an increased risk for alcohol abuse. This makes it difficult to compare overall abuse rates between the non-military population.

A 2017 study found that veterans were more likely to use alcohol compared to their non-veteran counterparts.

Just over four percent of active-duty members reported misusing one or more prescription drugs in the past year.

The most common instance of active-duty personnel abusing opioids is that it happened after suffering an injury and taking a legitimate prescription.

However, due to the high-stress environment of active duty, those taking opioids, even for a legitimate reason, are at a much higher risk for developing an addiction.

Veterans are more likely to have unique needs related to pain management. More than two-thirds of vets report experienced pain after leaving service.

A 2015 report on active-duty personnel found that:

Among veterans, tobacco use is more likely than their non-veteran counterparts in nearly all age groups. 30 percent of veterans reported using tobacco products at some point.

The VA provides many resources for veterans for substance abuse and mental health. The following is a summary of the benefits the VA offers.

Medication Benefits Offered Through the VA:

Counseling and Therapy Options Offered at the VA:

Other Services Offers at the VA:

How to Access VA Services for Substance Abuse Problems

To access any of the above services, individuals must first apply for VA health care.

Typically, you will hear back about your application in less than a week. Here are the items you will need to apply:

How To Find Help If You Don’t Have VA Benefits

If you are unable to enroll in VA benefits, or your application is rejected, you still may be eligible for care if:

A Note About VA Benefits and Care

While the VA helps thousands of veterans and their families, their services are limited by what the government will pay for. This means that the treatment received here is a little more basic and straightforward.

In some instances, this kind of treatment will not be beneficial for some individuals.

If you are interested in a treatment approach that does not rely on substitute medications or brief counseling interventions you may want to consider a private treatment facility like Elevate Addiction Services.

At Elevate, we believe in treating the whole person, mind, body, and spirit. We will safely help clients detox from ALL substances.

Once they are physically stable, they will move to the physical healing portion of our treatment program.

This phase focuses on using exercise as an emotional outlet to help cope with substance abuse withdrawal symptoms like depression and anxiety.

While working on their physical healing, clients will also work through emotional barriers via individual, group, and family counseling.

From day one, we also begin to think about the exit strategy for each client. We help them plan on what will come after their treatment program.

To support our veteran community in Northern California, Elevate is now an in-network facility for those who carry Tricare Health insurance.

If you’ve been through addiction treatment and still weren’t able to kick the habit, consider contacting Elevate Addiction Services today.

We will verify your insurance coverage, get you a quote for treatment at our facility, and help you plan any necessary travel needs.

Private rehab centers often cost more than services offered through the VA. However, we also know that you get what you pay for.

If you are looking to make a real change and take back control of your life from substance abuse, don’t hesitate, call today.