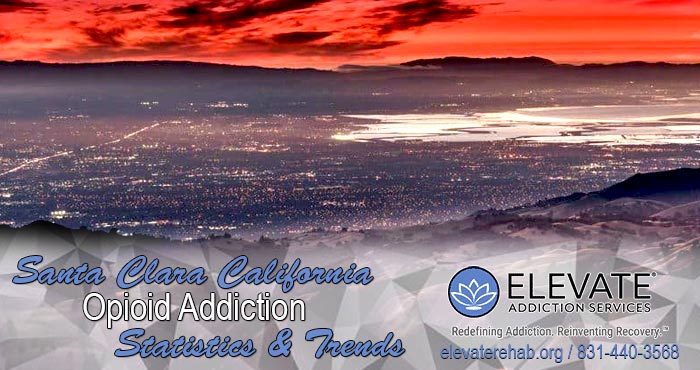 Santa Clara County serves as an example of how addiction hurts more than just the individual: Its reach can affect entire communities. In 2016 alone, there were 66 opioid overdose-related deaths in Santa Clara County.

California has unique concerns when it comes to drugs compared to other states. Mexican drug cartels control most of the heroin flowing into the United States, and Santa Clara law enforcement officials have cited the area as a prominent trafficking hub for the cartels.

U.S. Customs and Border Protection officials seize millions of dollars in illegal drug shipments at the U.S.-Mexico border every year, but the lion’s share makes it to its many destinations across the country. Santa Clara County serves as a gateway to the rest of California and the other Western states.

In 2009, Santa Clara law enforcement worked with federal agents to secure a 70-pound seizure of cartel heroin in East Palo Alto, which held a street value of more than $5 million. For the next three years, undercover agents tracked targets involved with the trafficking operation and successfully purchased three pounds of heroin from cartel operators in the area.

The investigation reached a conclusion in May of 2012 when federal and local agents arrested 12 individuals involved in the trafficking operation in the area.

The Opioid Crisis And The War On Drugs

While most Americans are aware of the dangers of heroin, many do not exercise the same scrutiny when it comes to prescription drugs. In 2011 alone, more than 360,000 Americans visited emergency rooms for issues related to non-heroin opioid use.

Most people assume that heroin is the most lethal opioid in America, but statistics from law enforcement officials, hospitals and researchers indicate that prescription opioids are responsible for more overdoses and deaths than heroin.

From Prescription Use To Heroin

Unfortunately, prescription opioids are a very easy gateway to heroin. Part of the reason the opioid crisis has reached epidemic levels is due to how easy it is for the average person to secure opioids.

Prescription opioid painkillers are extremely effective at treating pain, but they are also addictive, with very unpleasant withdrawal symptoms.

Once a person has developed a dependency on an opioid prescription, he or she will inevitably run out of refills. An individual in this situation faces a choice: Enter rehab or buy opioids on the street.

The street value of prescription opioid pills is astronomical. A single pill can cost more than $20 in some areas. Some people choose to go this route and quickly spend substantial amounts to maintain their addiction.

When prescription opioids are no longer feasible, people with opioid dependencies may turn to heroin as a cheap and effective alternative.

While a single opioid pill may be $20 on the street, a dose of heroin is much more potent and can cost as little as $5. This trend of shifting from prescription opioids to heroin is particularly disturbing considering the number of opioid prescriptions in the Santa Clara area.

While the Orange County District Attorney’s Office has declined to comment until the settlement finalizes and Teva has explicitly denied any wrongdoing, the lawsuit alleges that Teva’s marketing campaign misrepresented the acceptable uses of their opioid medications.

Over the past decade or so, the prescription opioid market has exploded from a niche subculture serving patients who require short-term pain management solutions (for issues like cancer treatment) into something much larger. It has become a multibillion-dollar industry that supplies people suffering from chronic pain with highly addictive medications.

Deaths and Other Negative Effects on Santa Clara County

While lawsuits and legislation against pharmaceutical companies and trafficking busts address a few causes of the opioid problem, they do very little to address the ongoing effects of the epidemic. Many Santa Clara County residents currently struggle with addiction.

Naloxone is one of the few medications capable of reversing the effects of a heroin overdose by blocking opioid receptors in the brain. Previously, naloxone was only available through hospitals, emergency medical responders and the police. This would deter many people from seeking the overdose remedy for fear of arrest.

Now, Santa Clara officials recognize the need for wider availability of naloxone. Narcan is a new version of naloxone in a nasal spray form, making it very easy for anyone to administer a life-saving dose when the situation demands one.

A drug problem can ruin a person financially, and many of the homeless people living in Santa Clara County and the rest of the country struggle with addiction. Homeless individuals with opioid addictions will typically do whatever they can to secure more opioids, but these individuals have very few options for help in the event of an overdose.

Santa Clara County law enforcement is investigating an incident from July of 2017 involving four county jail inmates who overdosed on the same day. The four men appeared to overdose on some kind of opioid, and police suspect heroin is to blame. The police are also unsure of how the inmates managed to secure the drugs inside the jail, indicating poor safety standards and negligence on part of the jail staff.

No Clear End in Sight

Unfortunately, the opioid crisis in Santa Clara County and across the country continues to worsen rather than improve, and many parts of the country have seen sharp increases in the number of opioid-related hospitalizations, overdoses and deaths.

In 2015 alone, there were 88 overdose hospitalizations and 85 opioid-related emergency room visits in Santa Clara County. Hopefully, as public awareness grows around the opioid crisis in the U.S., more Americans struggling with opioid addiction will seek addiction treatment sooner rather than later.