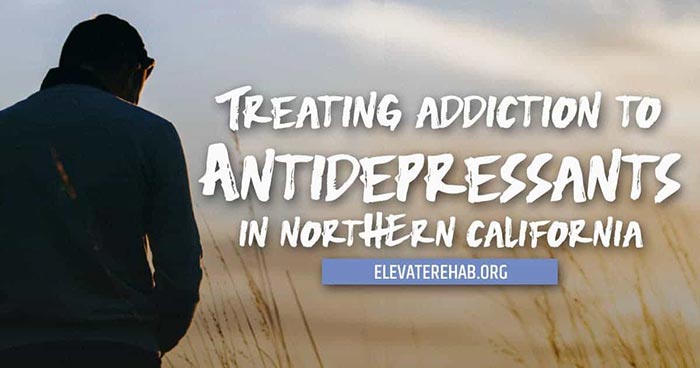 Antidepressant medication has been in circulation on the pharmaceutical market since the 1950s.

Doctors prescribe antidepressants to not only treat depression, but other conditions such as:

More recently, pharmaceuticals such as antidepressants have been prescribed when treating substance abuse.

Unfortunately, this is often just masking the symptoms of the underlying issue; addiction.

While it is true that there are co-occurring disorders and that many people who abuse drugs and alcohol also experience depression, anxiety, etc, it stands to reason that thoroughly tackling the addiction itself should resolve many of these symptoms.

Pharmaceuticals typically alter, suppress, or enhance the body’s natural functions, that is what they are designed to do.

However, when taking the medications, the body becomes reliant on an outside chemical to do its job and one can and will become physically dependent on them.

This is perfectly acceptable in cases of physical, medical issues such as insulin for diabetes or medication to lower blood pressure to decrease risk of a heart attack.

But when comparing taking mind or mood-altering medication versus resolving issues that make you feel bad, it is always beneficial to allow the body to naturally reset itself in order to achieve balance while dealing with the root causes of these symptoms in treatment and through therapy.

Further, depending on a pill to solve your problems is a psychological habit that does not typically bode well for individuals with a history of substance abuse.

It is common knowledge that you can’t take a pill to become happy. Unfortunately, antidepressant medications can be habit-forming, carrying a moderate risk of addiction.

Using anti-depressants long-term can cause someone to develop a dependence on the substance and the effects it delivers.

At Elevate Addiction Services, we help those people who are stuck on antidepressants or other pharmaceuticals who are really trying to break anissue stemming from addiction.

Providing it is medically safe and the client is motivated, our medical staff can safely and successfully taper a client off pharmaceuticals while also addressing symptoms through therapy.

The clients always feel “more alive” and “less robotic” as their body begins to reset itself.

The most common type of antidepressants is more formally known as SSRIs, or selective serotonin reuptake inhibitors.

Those who suffer from depression often are having issues with signals being sent back and forth between brain cells.

SSRIs allow more serotonin to be released in the brain so the messages between the brain cells can be sent correctly.

In total, SSRIs try to regulate the user’s emotions.

When it comes to different types of antidepressants, some names you might recognize are:

Please note that Wellbutrin is actually a norepinephrine-dopamine reuptake inhibitor (NDRI) that has antidepressant properties.

Unlike other antidepressant medication, Wellbutrin is also prescribed for smoking cessation. Also, it’s less likely to cause weight gain or sexual dysfunction, which are risks associated with SSRIs.

However, Wellbutrin along with SSRIs have a moderate to high risk for abuse, so these medications should be only be taken as prescribed or avoided altogether.
At Elevate, our stance is that medications such as these should be avoided unless medically necessary, and even then, it should be for a short, definite amount of time.

Antidepressants can be abused by either taking more than the prescribed dose at one time or, in some instances, by breaking open the capsule and inhaling the substance. In either scenario, the user is chasing some type of high from the drug.

This type of medication can also be abused when somebody’s prescription has ended and they turn to the black market for more of the substance. With that in mind, let’s take a look at a few statistics and facts that show the state of antidepressant abuse in the U.S.:

Although antidepressants aren’t commonly associated with addiction, long-term users will feel withdrawal symptoms if they suddenly cease using the substance.

The following symptoms have been reported in antidepressant withdrawal cases:

For some users, withdrawal symptoms may not emerge until a couple of weeks after last using the substance.

This is why it is so important to do a proper, medically-supervised taper if considering coming off antidepressants.

How We Treat Addiction to Antidepressants at Elevate

Elevate Addiction Services helps people rebuild their lives by offering a blend of a medical and holistic approach to recovery while decreasing dependence from antidepressants and other pharmaceuticals responsibly over time.

Ultimately, the goal is to have them come out of our program completely substance-free and with a new outlook on their lives. While this doesn’t happen for everyone, it’s ideal to shoot for if it is medically approved and safe.

We start out by offering closely supervised detox from antidepressants to help stabilize the individual and help him or her get accustomed to not having to take an antidepressant for physical, mental or emotional symptoms.

Holistic therapies such as mindfulness, yoga, massage, aromatherapy with essential oils, and other supplemental therapies to relieve symptoms will be used during this time.

Support Well Beyond the Inpatient Phase of Treatment

Once the individual appears to be ready to return to life outside of our program, we hold a graduation for them and set them up with a customized aftercare plan to keep their recovery going strongly.

The aftercare phase of treatment includes ongoing one-on-one counseling with an Elevate professional, as well as support group referrals, vocational training, and much more to help the graduate avoid relapse.

We even offer a Graduate Assurance Plan, which means that if any client has graduated our program and relapsed within six months, he or she can return to our facility for up to 30 days of treatment at no additional cost.

We are committed to helping each client find success in their ongoing recovery.

Elevate’s inpatient addiction rehab program is open to anybody in state and anywhere else in the U.S. We have beautiful, expansive facilities in both Santa Cruz County and South Lake Tahoe, California.

Not sure which location is the right place to start your recovery? Call our friendly admissions counselors anytime and have them assess your situation and discuss your options.